Moses was the greatest prophet from Bible history to present day. He was the instrument of God to perform the mightiest of miracles, signs and wonders: the Red Sea was parted and a nation crossed over on dry land, water was provided in the wilderness by striking a rock, he communed with God and received instruction to lead a nation through the wilderness by following a cloud and a pillar of fire, food was miraculously provided to feed them, their clothes and shoes never wore out!….But he never entered the Promised Land!

He was the chosen vessel of God to lead the Israelites to the Promised Land – a land that he was never permitted to enter in to because God was displeased with him at Meribah. Numbers 20 records the event of the unrest amongst the children of Israel as they were desperate for water. The Lord gave Moses instruction to take his rod and Aaron, gather the people together and speak to the rock, and water would come forth. But Moses was angry with the people murmuring and he did not follow the Lord’s instruction. Numbers 20:10-11 “And Moses and Aaron gathered the congregation together before the rock, and he said unto them,”Hear now, you rebels, must we fetch you water out of this rock?” And Moses lifted up his hand and with his rod he smote the rock twice: and the water came out abundantly….”

Moses was instructed to speak to the rock, not strike it in this instance. He called the people rebels in his anger and measured himself and Aaron alongside of God when he said, “Must WE fetch you water out of this rock? Only God could perform the miracle of bringing water from a rock, Moses was just a tool in the hand of God. God is the worker of miracles, thus all the credit – the glory, is His alone. As for judging the people as rebels, his history bears record of him being just that! In his younger days he killed a man and fled to the backside of the desert in fear, when God called him to lead the Israelites out of Egypt to the Promised Land he recognised his own inadequacies and wanted the Lord to send someone else to be their leader. In verse 24 God declared that Moses and Aaron rebelled against His word when the rock was struck, instead of spoken to. When God calls you a rebel you have no grounds to argue!

At the Waters of Meribah, the water coming forth from the rock, Moses lost sight of the fact that he was just the instrument of God to perform God’s mighty miracles, not his! Moses became familiar with the Lord and displeased Him by not sanctifying His name before the people, (verse 12). Because of this, the Lord said he would not enter into the Promised Land, verse 12. Moses was greatly used of God but great blessing is accompanied by much responsibility. We all have much to learn from the lessons recorded in scripture for us to glean from. We can learn from the mistakes of others. God said to Moses, “You did not sanctify my name…” Moses did not separate himself from the mighty miracles of God, he touched God’s glory – the credit for performing the mighty works.

Where is the area where I do not sanctify God’s name? Do I take the credit to my own character for the love and grace of God at work in my life? These are the areas that will keep me out of fullness, God’s Promised Land to me.

The children of Israel were sustained in the wilderness. God’s plan is not to just sustain us, but for us to enter into fullness – the Promised Land. The older generation of Israelites died in the wilderness, apart from Joshua and Caleb, only the younger generation went in. Thank God for the tremendous inheritance we have been privileged to receive from our elderly mentors, they were the purpose and blessing of God to us, but this is a new day. God is holding out the sceptre to us to enter into fullness. Once the children of Israel entered the Promised Land it was a new day with a new diet. No more manna, but a land flowing with milk, honey and fruits in abundance!

Some will enter in to it, whilst others will refuse it, but God will have a people who will be conformed to the image of Christ.

It is recorded of Joshua and Caleb that they WHOLLY followed the Lord. Sanctification means to separate, to hallow. We need to make a distinct separation of ourselves from God’s glory, the credit due to His holy name. Moses identified with God’s credit when he said in anger, “Must WE bring water out of the rock….” He lost sight of the fact that he was just an instrument in God’s hand.

When God sanctifies us He sets us apart for Himself….not a separation from the people in the world but a separation from worldly values and standards that is real. God’s work of sanctification is evidenced in that the “stuff” of the world does not stick to us or effect us any more, because He has separated us from it. It is an evidence of the love of His fatherhood to His child.

1 Peter 3:15 “Sanctify the Lord God in your hearts,” because the mouth “speaks from the fullness of the heart.” A heart that is Christ ruled manifests His peace.

God is wooing us into a place of fullness, it is our responsibility to respond to His promptings and enter in. What a tragedy if we never fulfill our divine destiny! Let us learn from Moses’ example and not judge others in anger, become familiar with the Lord and take the credit due to His holy name alone. If we do not learn from history then, sadly, we will repeat it. The Promised Land of fullness is our divine birthright if we will enter in with humility under God’s terms for the New Day, where no man will glory in His presence, and our lives will echo “Thine is the kingdom, Thine is the power and Thine is the glory, forever and ever, Amen.” 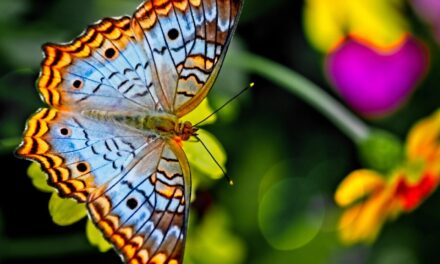 DO NOT LEAN ON YOUR OWN UNDERSTANDING

HAVE YOU HAD YOUR BUTTONS PRESSED LATELY?