I CAN DO ALL THINGS THROUGH CHRIST…..

Acts chapter 9 records the conversion of Saul of Tarsus.  He was arrested on his mission to capture the disciples of the Lord and have them slaughtered.   A bright light shone from heaven, he fell to the earth and Jesus spoke to him, asking why he was persecuting Him in the lives of His disciples.  Scripture records the details of Saul’s amazing conversion, at which the Lord gave him a commission declaring of him: Acts 9:15 “…..He is a chosen vessel unto me, to bear my name before the Gentiles, and kings and the children of Israel.”    (Henceforth, as from Acts 13:9, Saul is referred to as Paul).

Before his conversion, Paul was an arrogant man, proud of his heritage.  Philippians 3:5  records his roots:  “Circumcised the eighth day, of the stock of Israel, of the tribe of Benjamin, a Hebrew of Hebrews, as touching the law, a Pharisee.”  He was legalistic to the law and an educated man.  After his conversion, with his renewed mind in Christ, these things meant nothing to him.  Philippians 3:7-10 records his powerful declaration: “But what things were gain to me, those things I counted loss for Christ.  Yea doubtless and I count all things but loss for the excellency of the knowledge of Christ Jesus my Lord, for whom I have suffered the loss of all things, and do count them but dung, that I may win Christ, and be found in Him…….that I may know Him and the power of His resurrection….”

This was Paul’s background.  He referred to himself as “the chief of sinners, the least of the apostles”, and yet, he did more than all the other apostles.

There are some things in scripture that appear to be an apparent contradiction, but the truth is that we just lack revelation regarding them.  God is not the author of confusion.  Consider this: Paul declared, Philippians 4:13, “I can do all things through Christ who strengthens me.”    He experienced the power of the resurrected Christ living in, and through, him.  However, Jesus declared , John 5:19, “……..the Son can do nothing of Himself…”  John 5:30 “I can of mine own self do nothing: as I hear I judge, and my judgement is just because I do not seek my own will, but the will of the Father who has sent me.”   Jesus, as the Son of man, declared that of Himself He could do nothing, and yet, He did everything, (healed the sick, raised the dead, stilled the storm, changed water into wine etc.), by the power of Another, His Father, the Almighty God.  Jesus was the divine bottleneck, or channel, through which all the power of God flowed.  Jesus could be trusted with all the fullness of God because He had surrendered His will in obedience to His Father.  As the Son of man, Jesus would have experienced all the emotions we feel: joy, sorrow, tiredness, hunger, thirst, emotional pain, but He never surrendered His Father’s presence to a situation because He always sought His Father’s will, laying aside His own.  He only spoke the words His Father gave Him.  He only did the things that pleased His Father.   He was so in tune with Him that He could say to Philip, His disciple, ( who asked Jesus to show them the Father), “….He that has seen me, has seen the Father in me…..John 14:6-10.  Jesus lived a sinless life.  He was transparent.  There was no darkness in Him at all.  The devil came and found nothing impure in Him, so had no foothold.  He was the complete embodiment of all the fullness of God which His Father channelled through Him.  Jesus always gave the credit to His Father, recognising the source of His divine power and nature.  He always gave the glory to Him, never seeking it for Himself.

Jesus was our pattern man.  Paul recognised this.  When Paul declared, “I can do all things through Christ who strengthens me”, He was identifying with Jesus, the source of all resurrection life in us, who declared, “I can of mine own self do nothing. It is the Father in me, He does the works.”  The divine power at work in Paul was of Jesus, and the divine power at work in Jesus is all of God.  Romans 11:36 declares,  “For of Him, through Him and to Him are all things.”   Do I recognise this in my life?  God has a grid.  Nothing comes my way but by His permission.  In considering this I must also recognise that some of my circumstances are consequences of a wrong choice.  With the help of the Holy Spirit they can become my learning curves.  Failure is “truth’s apprenticeship” in God.  He never condemns, but He will convict and lead a humble heart back on track as He teaches me His ways.

Like Jesus and Paul, I must recognise that without the Lord, I can do nothing.  He gives me the very air I breathe each day and causes every organ in my “fearfully and wonderfully made” body to function.  He is the strength of my life.  His divine power enables me to function each day by His love, faithfulness, mercy and grace.  He is my Shield and my Keeper as well as my Saviour.   Our Heavenly Father desires that our lives would be a channel for the life of His Son, never seeking our own glory but giving Him all the credit.  My life should be a channel for the Indwelling Christ with no blockages of self as I, too, declare of my life, “…of Him, to Him and through Him are ALL things”……and  “I can do all things through CHRIST who strengthens me.”

My life pivots on the tap root of the manifold grace of God.  Take it away…and I have nothing. We can rejoice and declare with Paul that “In Him we live, and move and have our being,” Acts 17:28.

COME OUT FROM BEHIND THE TREES! 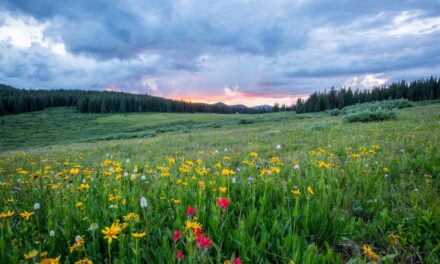