WHAT ROBE ARE YOU ADORNED IN?

Each of us has a reputation. We have one of ourselves, one held by others who know and observe us, and then, more importantly, our reputation in God’s eyes, who sees and knows us better than we know ourselves, (Psalm 139). Philippians 2:6-8 declares of Jesus, “Who, being in the form of God, thought it not robbery to be equal with God, BUT MADE HIMSELF OF NO REPUTATION, but took upon him the form of a servant, and was made in the likeness of men. And being found in fashion as a man, he humbled himself and became obedient to death.”

Consider the first few lines of the song by Noel Richards:
You laid aside your majesty,
Gave up everything for me,
Suffered at the hands of those you had created….

Jesus is our supreme example of humility. He came to the earth in obedience to His Father, laid aside all the glories of heaven and vested Himself as the Son of Man. As such, He suffered at the very hands of those He had created!! He knew full well our degradation, but He came and stood by us. The finished work of the Cross bought our redemption.

The celebrities of this world seek fame and acknowledgement among men to promote themselves, their image and reputation for self glory. Mark 9″ 33-35 records the account of Jesus finding the disciples discussing among themselves who should be the greatest. Jesus taught them, v. 35, “….if any man desire to be first, the same shall be last of all and servant of all.” In the kingdom of heaven, this is true greatness, humility.

Humility is the adorning that pleases the heart of God, for it is the nature of His Son. Our heavenly Father has provided this “royal robe” to be clothed in. When I refuse to walk in humility, I despise the very provision He has made for me through the sacrifice of His Son.

If we consider how Jesus grew up in the household of a large family, with several brothers and sisters, we can imagine He had plenty of opportunity to be misunderstood and taken for granted, witnessing the usual family squabbles and ups and downs of family life. Here He learnt obedience to His Heavenly Father in an ordinary household. I cannot imagine Him having a “pity party” over misunderstandings, but would take His problems to His Heavenly Father and listen to His “still, small voice.” He stayed “hidden” among His family, learning obedience until the time appointed of God for His ministry.

The New Testament record of Jesus’ earthly ministry in the four gospels declare many miracles and wise teachings. He could have been a huge “celebrity” at that time if He had sort honour for Himself. The records reveal His nature of selflessness. He always sought His Father’s will above His own. His mission on earth was to do His Father’s will, only speak the words His Father gave Him and only do the things His Father instructed. He always declared that the works He did, were not OF Him, but THROUGH Him, by the power of Another, greater than Himself, His Father. He never took or sought the credit to Himself, but gave the glory to His Father working through Him. This is our example from our Pattern Man. Any gift God has given me to operate in, is to extend his kingdom for His glory, not mine. Jesus taught us how to pray in the “Lord’s prayer”, Matthew 6:9-13. He ends it with “For thine is the kingdom, and the power and the glory, forever, Amen”. Man often seeks God’s power for His own ends and glory, but God will not permit it. He has declared the power is for the extension of His kingdom, for His glory. This is divine purpose.

Proverbs 25:2 declares “It is the glory of God to conceal a thing…..” Why does He want to conceal a matter? Our nature wants to show, to seek attention, desire men’s praise. Consider this: Time and time again we read how Jesus instructed the people He healed to “go…and tell no man,” after they had received their healing. Mark chapters 7-9 record this phrase several times. Even after the event of Jesus being transfigured on the mountain with Peter, James and John, Jesus instructed them to tell no man of the event until after His resurrection, (Mark 9:9). Jesus had no desire to promote His reputation, only to promote His Father.

God had placed His wisdom in His Son, hidden Jesus in an ordinary family where He matured and learnt obedience, (Hebrews 5:8).

Do I seek a reputation among men, seeking honour for myself? Have I learnt to acknowledge the Lord in ALL things? The apostle Paul reminds us, “What have you got that you did not first receive…” If God has blessed me with anything, He is the source and to Him belongs all the glory/credit and thanks. He blesses me because He loves me and seeks to extend His kingdom through me, to others, just as Jesus did.

If I am seeking to promote myself in any way for my glory, I operate in pride and become God’s enemy. Man’s glory is the enemy of God’s glory. 1 Peter 5:5 “…God resists the proud.” I do not want God to resist me!!! Humbling and repentance is the road to restoration, back to pleasing the Father, peace and rest once more.

Jesus is the Light of the world. His light is in us and it has value in the darkness around us. It is our responsibility to walk in the Light, to be a light, but to give all the credit to the Lord. The amount of light I am demonstrating to the world is equal to the amount of humility I am embracing and walking in. True humility will always display the nature and life of the Son of God through me, to God’s glory.

All hail the Lamb, enthroned on high. May I enthrone Him in my heart.

“WE ARE HIS WORKMANSHIP” 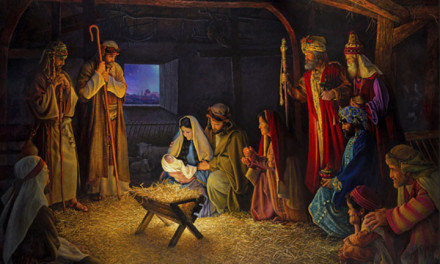 THE CROSS IS THE POWER OF GOD