Obedience cannot be claimed by faith, neither obtained in a prayer line, it comes through the discipline of learning, making godly choices through life experiences.  Scripture declares, “…..we ought to obey God  rather than men”,  Acts 5:29.

Jesus had to learn obedience as the Son of man!  Hebrews 5:8 “Though he were a Son , yet learned he obedience by the things which he suffered”.  The word suffered  used here means  permitted, yielded to, or allowed.

Luke 2: 40-52 records the event of Jesus, aged 12,  and His family making the journey to Jerusalem for the annual Passover feast.  Jesus’ parents making the return journey home realised He was missing.  They eventually found Him in the temple sitting with the doctors of the law, listening and asking questions.  All who heard Him were amazed at His understanding and answers.  Mary and Joseph were naturally anguished at His disappearance and addressed Jesus over the distress caused them.  Jesus answer surprised them: “How is it that you sought me, did you not know that I must be about my father’s business?”  Luke 2:49.

Verse 51 continues “And he went down with them (he humbled himself) and came to Nazareth and was subject to them…….And Jesus increased in stature  and in favour with God and man”.  Between the ages of 12 to 30, Jesus had 18 silent years learning obedience as the Son of man before His apprenticeship was fulfilled.   There is no record in scripture of those silent years.  Jesus knew His commission at the age of 12, but he had to wait for the appointed time of His Father before His earthly ministry began.  In those waiting years He humbled Himself, put Himself under His parents, learning obedience.

There is a difference between being a follower of Jesus or a disciple of His.  Which am I? There were many followers of Jesus in his time on earth, but they did not necessarily become disciples.  They were only interested in observing Him, but never committed to Him. So too, this day.  The root word of disciple is discipline.  It is essential in learning.  A disciple is required to walk in humility, bow to the guidance of the Holy Spirit and learn obedience to the voice of God.

In order to hear God’s voice we have to learn to listen.  As we hear and obey the voice gets clearer.  If we know we hear, yet disobey, we suffer the consequences of disobedience and God’s voice is fainter or silent.

God’s words are so important.  Moses made the mistake of repeating an action from past experience instead of obeying God’s proceeding word.  Jesus said,  “Man shall not live by bread alone but by every word that PROCEEDS from the mouth of God”, Luke 4:4 quoting from Deuteronomy 8:3.  A proceeding word is a living word, it is creative.  A new word from the mouth of God replaces the past one.  We cannot live on past experiences when God requires us to move on.

Numbers 20 records two of Moses’ grave mistakes.   Moses was equipped of God for his call to lead the children of Israel from Egypt to Canaan.  He had a tremendous anointing and power of God upon his life.  It is vital to remember that to whom much is given of God, much is required.  We are not our own to do as our flesh pleases.  On a previous occasion the Lord had told Moses to strike the rock and water gushed out for the people.  On this occasion, (Numbers 20), the Lord told Moses to speak to the rock to produce water to quench the people’s thirst.  Moses made the mistake here of not listening properly to God’s word, probably because he rose up in anger and pride and called the people rebels and struck the rock.   His greatest mistake in this chapter though was identifying himself with God and His power. (To whom much is given, much is required).  Numbers 20:10-11  “Moses and Aaron gathered the congregation together before the rock and said to them, “Hear now you rebels, must WE fetch you water out of this rock?  Moses lifted up his rod and smote the rock twice and water  came out abundantly, the congregation drank and their beasts also”.

Moses identified himself with God’s power – “must WE fetch you water out of this rock?”    Moses could not bring water from the rock.   Only the power of God could do that.  Moses responsibility was to obey and God would perform the miracle.  All the credit belonged to God, not Moses.   In spite of Moses’ disobedience God blessed the people with the water because of His loving kindness, not because Moses was right.  Moses however had a severe consequence to his actions.  The Lord spoke to Moses and Aaron regarding their actions, because they did not sanctify His name before the people in this incident, the Lord would not permit them into the Promised Land. (verse 12)

What a lesson for us!!   Is there a place in my life where I am not sanctifying the Lord’s name?  Only the Holy Spirit can show me as I humbly request.

I have a birthright through Jesus’ finished work at Calvary.  Everything I need is available in Christ.  “My God shall supply all your need according to his riches in glory by Christ Jesus”, Philippians 4:19.  Think no lack!   My Father is the great I AM.

God is seeking a people who will empty themselves of self that the fullness of His Son may come to full stature in each of us – lost and found IN  Christ.  Jesus only did the things that pleased His Father, only spoke the words His father gave Him.  As we listen and obey, we shall indeed be found in Him, the living Christ.  Christ in me, the hope of glory.  Only as we walk in humility will we learn obedience and follow in the steps of Jesus, bringing glory to the Father and sanctifying the name above all names. 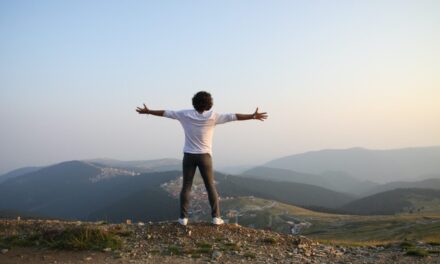 IS GOD WAITING FOR ME?

PEACE IN THE STORM